Would you be interested in playing boules in the village 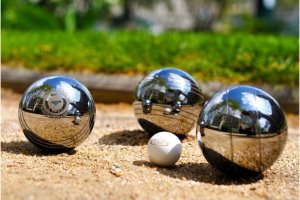 Boules is a collective name for a wide range of games similar to bowls in which the objective is to throw or roll heavy balls (called boules in France) as closely as possible to a small target ball, called the jack in English.

Boules-type games are traditional and popular in many European countries. Boules games are often played in open spaces (town squares and parks) in villages and towns. Dedicated playing areas for boules-type games are typically large, level, rectangular courts made of flattened earth, gravel, or crushed stone, enclosed in wooden rails or back boards. To win, a team must reach 15 points, with a few exceptions.

We are investigating the construction of a boules terrain in the community garden, using the patch of land currently covered in gravel.

If there is interest in the community, we will look to find funding to help pay for the building and material costs.

Please complete the online survey to let us know your views and help us establish whether it is a project that would benefit the village.